February 27, 2019
What color is your meeting? What color defines your cause? Whatever the answer, the team at your San Diego Convention Center is helping to create new experiences for our customers ­– and our community – through the lighting of our Sails Pavilion.

It's been one year this month since our renovated rooftop was unveiled featuring LED colored lights. And 26 events, from Comic-Con International, to citywide medical meetings and community events, like Yoga Under the Sails, have lit up the night. In fact, the lights have illuminated our city's skyline for 100 days since becoming operational.

The lights updated the look of one of the most iconic and unique spaces of the San Diego skyline. After 29 years in service, the original roof was replaced, along with a new concrete floor and updated fire-life safety equipment.

Not only is the lighting feature being used by our customers to set a "mood" through color to theme their conventions, meetings and events, but it also has created a new opportunity for a community connection, as the venue celebrates our 30th anniversary year in 2019.

Here's a look at the lights in action.

Our new lighting feature has also created an opportunity for local non-profits to raise awareness about their causes. We've worked in partnership with ten area non-profits, including Autism Awareness, Susan G. Komen San Diego and even lit the Sails in support of LGBT Pride.

A local business, Pro-Cal Lighting from San Marcos, was selected to install the LED lighting feature which can be programmed to any color and can be set to music. The lights were paid for by the Convention Center's reserves, at a cost of $377,000. It costs around $25 a day to run the new efficient lights, even when they are colored. Here's some fun facts related to the project. 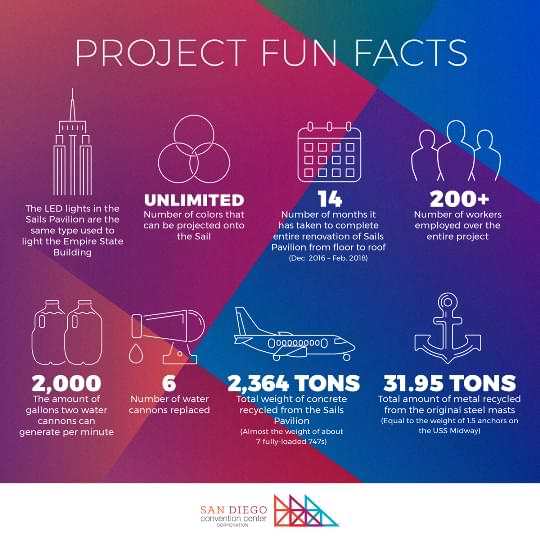 If you are interested in having the Sails Pavilion illuminated in honor or awareness of a charitable cause, please contact us at This email address is being protected from spambots. You need JavaScript enabled to view it. to inquire about availability.