When people ask me what we do at the San Diego Convention Center, I tell them this: we build a small city every week. These small cities become conventions, trade shows and events that bring thousands of visitors to San Diego during the most important week of their year.

From hematologists, to neurosurgeons, GIS mappers and chemists, they gather here in America's Finest City to connect and learn inside a city within the city, with infrastructure, security, power, food and beverage, and most importantly, an energy that invokes creativity and life-changing breakthroughs.

For nearly 30 years, your San Diego Convention Center has been the first impression for nearly 23 million guests to San Diego. This includes visitors from around the world, throughout the state and from across the street.

May 5 through May 11 is recognized nationally as "National Travel and Tourism Week," and I felt it fitting to talk about what our role is, as a Convention Center, to the Tourism Community in San Diego.

Our purpose is to be the premier gathering place that hosts tradeshows, conventions, and community events to economically benefit the San Diego region. Your convention center is different from every other venue because we are regarded as leaders in the convention and meetings industry. We've received top awards as a venue for sustainability, innovation and most importantly, as a destination.

Conventions and meetings are a key piece of our local tourism industry, the third largest contributor to San Diego's economy. Planners and attendees introduce new dollars and pay visitor taxes that benefit residents who live miles away from our building.

This focus on economic impact is not new. Generating economic benefits is at the core of our existence.

This fiscal year's activity is estimated to create $1.3 billion in regional impact, $742.3 million in direct attendee spending (a record) and $29 million in hotel and sales tax revenue. In fact, since opening in November 1989, your San Diego Convention Center's activity has generated $565 million in hotel and sales tax revenue which benefits the City of San Diego's general fund used to pave neighborhood streets, fund fire and police salaries and pay for parks. 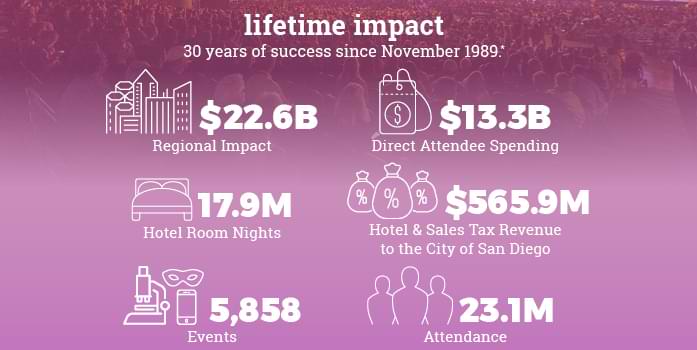 At the heart of your Convention Center is our team. This iconic building is the "office" for our staff, providing living wages for more than 400 full-time and part-time men and women who work for the Convention Center and our business partners. In addition, it takes nearly 900 food and beverage workers, as well as our in-house partner telecom and audio-visual teams, to produce successful events. And we cannot forget the hundreds of men and women of our eight partner labor groups who are hired to build these "small cities" each week. We're your neighbors, living as far north as Carlsbad, east to Jamul and even some members of our team cross the border.

We have employees who have been with us since our doors first opened. They all take great pride in their work.

We are the mothership to Comic-Con International and a key destination for major medical meetings, tradeshows, and conventions. With the help of our partners at the San Diego Tourism Authority, we collaboratively market the destination to attract the events that fill the region’s hotels, restaurants and attractions with visitors from out-of-town. We are a popular destination amongst the many event organizers in North America. San Diego is routinely considered a Top 5 destination for meetings. We were recently honored with the Gold Award for Best Convention Center in the Western United States by the 2018 Prevue Visionary Awards – in short, "Best of the West."

There is much competition for these shows, and about 20 other convention centers are currently expanding or have plans to add on. Based on this available information, our customers say additional space at the San Diego Convention Center can meet their demand for convention space and hotel accommodations.

San Diegans built this facility 30 years ago and San Diegans keep it running 24 hours a day. We opened in 1989 after being financed completely by the Port of San Diego. A Phase II expansion was completed in 2001 with funding from the passage of Prop A in 1998.

The Phase III expansion plan, which was approved by the California Coastal Commission in 2013, would add more than 400,000 square feet of exhibit, meeting and ballroom space and include a five-acre rooftop park and add an estimated 7,000 new jobs.

The plan was vetted during a thorough public process that addressed key issues such as open space, sustainability and accessibility.

The citizen's initiative that the City Council recently voted to move from November to March of 2020 is about raising a tax that is paid for by visitors. That tax would be the funding mechanism for the approved Phase III expansion.

I have said it before. I will say it again. I am proud to be the President and CEO of your San Diego Convention Center. It was my dream for many years to work at this venue. This is the pinnacle of my career, and I am excited about our future.